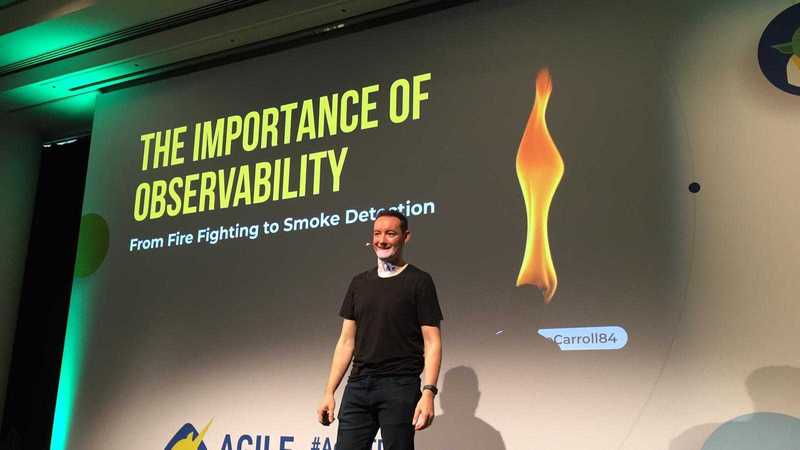 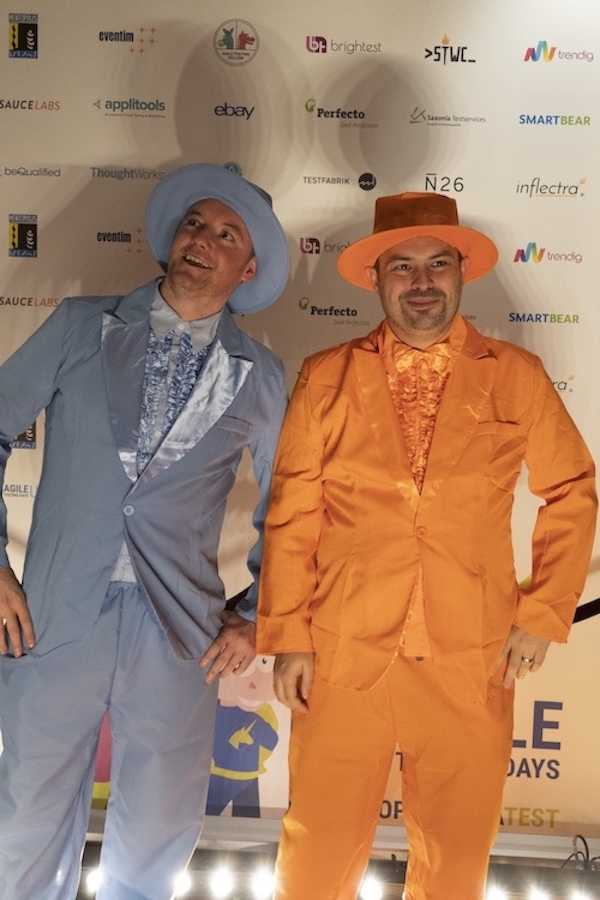 Me (Harry) and Rob (Lloyd) decided during this conference that the following year we wanted to return as speakers. Rob had just given a lightning talk on Testability. I hadn’t even spoken at a meet-up yet so decided trying to complete a lightning talk next year would be a realistic goal.

Now all I needed was a story.. 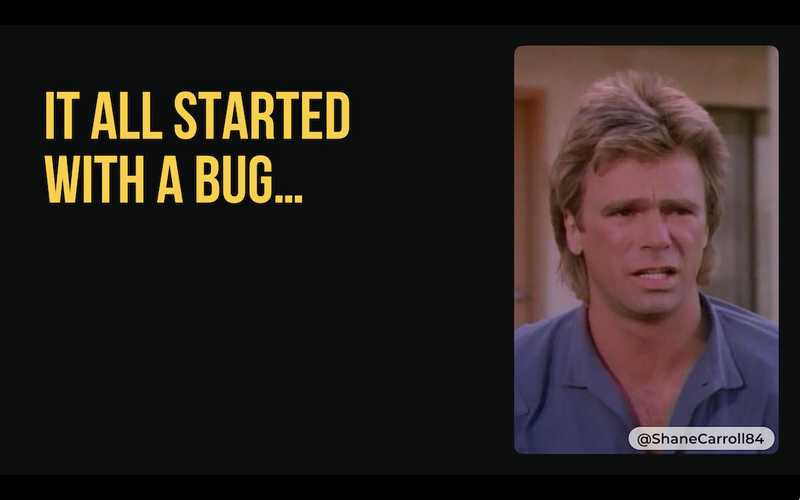 As I say in one of my slides it all started with a bug! Shortly before this conference happened our team got hit with a major bug. This was followed by some learning reviews, new tools and processes put in place, and significant changes to how our team worked.

This is beginning to sound like a good story right?

The company I work for, Poppulo, hosts regular Show & Tells, Demos, and Lightning Talks within the Engineering department. I gave a short presentation demonstrating some of the improvements we had made, and with that my first steps into public speaking had begun.

@ShaneCarroll84 talking about how the team are now using sentry to capture clientside exceptions which has added huge visibility into where issues are being introduced @PoppuloTech pic.twitter.com/kkZp3IQvvq

Luckily for me Cork has an excellent ministry of testing Meetup. Also luckily for me they were looking for some new speakers at that time. Luckily again I happen to work with the two co-founders of the Meetup - Rob and Conor who encouraged me to tell my story there.

In hindsight, looking at how all these events happened together reminds me of Stephan Kämpers “Being Lucky” keynote from last years Agile Testing Days. I was helping myself to be luckier!

The (to be repeated) question for the week:

What are you trying this week to be luckier?#BeingLucky pic.twitter.com/b9tfFQxjmE

Now I had to expand on what was just a short ten minute talk and also put some structure around it. It was pretty easy to flesh out as the story was evolving at the same time.

Our team was rapidly making improvements to our monitoring and observability and putting into practise some of the outcomes of our learning review. Conor has a lot of experience with public speaking and toastmasters and was great at giving tips and feedback to improve the talk.

What’s In A Name?

It needed a catchy title. We brainstormed and “Observability - From Fire Fighting to Smoke Detection” was born! Rob is taking credit for the title but that’s something he would do anyway

The timing of this coincided with the deadline of the call for papers for Agile Testing Days 2019. I tried to distill my talk into an abstract and some key takeaways, submit and hopefully get that lightning talk in Potsdam!

The April Meetup of @ministryoftest Cork has kicked off.@ShaneCarroll84 delivering a talk on Observability. pic.twitter.com/xDPqpolQsO

I was delighted with how the Ministry of Test Meetup went. I felt pretty nervous beforehand and starting off but it’s a really friendly crowd there and a great venue to present for the first time at. The feedback was that I appeared calm when I was speaking so that was a relief as I didn’t feel that way.
Beforehand I had some practise runs with our test team and a transatlantic call with my American tester friends. Shoutout to Jen and Amanda!

A few weeks later I got a huge shock. My submission was accepted for Agile Testing Days 2019, but not as a lightning talk, instead a full proper talk. This was not part of the plan!

Back To The Drawing Board

Now I had a lot more preparation to do so naturally procrastinated for several months. Eventually I got around to it restyling the slides. This basically involved tearing them up and starting from scratch. Luckily (again) I work with an awesome designer Edmundo who was more than happy to help with this, check out his blog.

Our first conversation went something like this:
Me “I need an image for this slide representing a usual daily stand up meeting, this is what I have at the moment” - presents generic image of stand up meeting downloaded from the web
Ed “If you use that image I’m never talking to you again.”

Clearly we had a good bit of work to do. I massively underestimated the amount of time spent preparing, slides, practising the talk and scouring the internet for suitable MacGyver images. 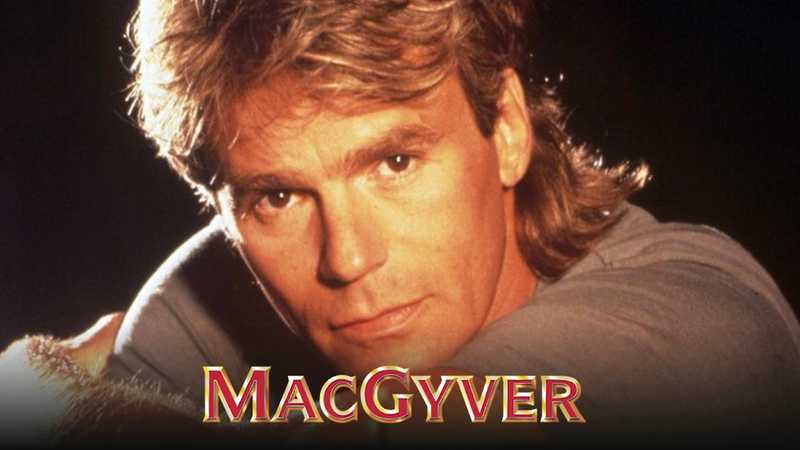 Once the slides were updated my next job was to practise it and gather feedback from some real humans and not just the voices in my head. This is where Jen and Amanda helped out again. They kindly volunteered to listen to my talk, “critique you and tear you down in detail”.

My takeaways from the practise run were as follows:

Still it’s much better to find out these things with time to work on them I guess rather than the night before. I then had another practise run with the test team in the office. This should be getting easy now right.. yeah, it was a complete disaster!

Firstly the room equipment wasn’t working properly so I couldn’t see my speaker notes. I changed my intro just before the start, hadn’t time to practise it yet so ended up forgetting half of it. I also had updated the order of the slides and got a bit lost half way then just stumbled through the rest of it. Off to Germany I went on the back of this brimming with confidence!

I arrived in Potsdam on Sunday so I had a couple of days to explore the town, relax and practise my talk some more. On Monday Stephan Kämper gave an inspiring keynote which I mentioned above. Another nugget I took from this was the advice that in general when you’re presenting the audience wants you to succeed. It might seem obvious but it’s still reassuring to hear this as a first time speaker.

If you're a first-time speaker at this conference, expect that your audience will like you, because they *want you to succeed*. Focus on the things you *can* do. You can't guarantee your laptop won't crash but you can be ready if it does. @S_2K #agiletd

This was followed by attending the speakers dinner for my first time. It was great to meet some new people, some first timers like myself and enjoy all the great food and wine. We retired back to the Dorint afterwards and I ended up scooping during the Great Dalmuti, not for my first time. 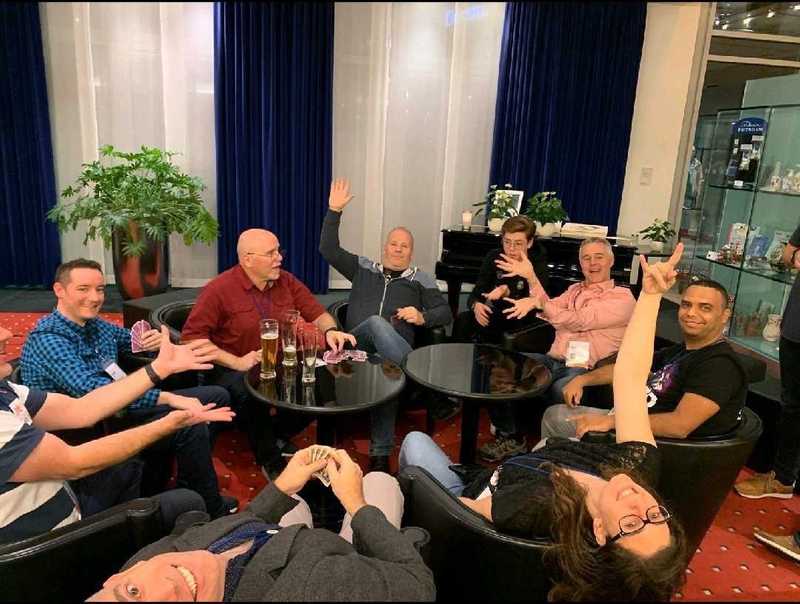 Who needs a clicker anyway?

The night before my talk I got approximately zero hours sleep just as I expected. I got the unexpected good news that the same talk had been accepted for ATD USA in June, but to be honest I couldn’t really process that until I’d gotten through this conference first!
I went down for breakfast in the hotel that morning and bumped into Abby Bangser there. Abby had given an unbelievable keynote on Observability the previous day and passed on some really useful last minute speaker tips for which I was extremely grateful.
I went back up to the room for a final practise run, then it was showtime! Once I was standing on stage ready to go I realised forgot to bring my clicker with me but sure no big deal, lucky they had a spare . Jen gave me the thumbs up and off I went!

So unbelievable proud of my friend @ShaneCarroll84 for speaking at #agiletd !! pic.twitter.com/lBa7G3ThuE

Told you this was gonna be a good day at #AgileTD!

Next up is @ShaneCarroll84 with the importance of observability: from fire fighting to smoke detection

Great Talk by @ShaneCarroll84 on observability! Interesting stories and insights, and I loved the slide design. There can't be enough MacGyver Gifs :D #agileTD pic.twitter.com/qhTMaJZW8H

Once I managed to get through the first few slides without freezing I actually loved every minute of it! My key takeaways from the whole first talk experience are as follows:

The main thing for me now is preparing to give this talk again in Chicago in June. I just got some feedback from the session ratings, so now I can incorporate that and make a few tweaks.

Another outcome of the conference was that it inspired a few of us to start our own learning group. After seeing one in action and the benefits of setting goals and being held accountable to them, it seemed like a great idea. I might just post an article on that if it turns out to be successful! One of my goals for that group was actually to start a blog so I guess that means:

My next goal is to get back speaking at Agile Testing Days 2020 so I’m already trying hard to think of a new subject to submit. I will be writing a blog post on the content of my talk shortly but in the meantime you can find a link to my slides here

Observability - From fire fighting to smoke detection from Shane Carroll

Wow that was a long blog post, I promise my next article won’t be as long!